This page explores the research into different atmospheric conditions and their effect on humans. The discoveries include a verifiable change in behavior, mood and health. It has been determined that cations (Positive Ions) really do have a detrimental effect on people.

The effects of ionization in the atmosphere

In 1974, the Swiss Meteorological Institute studied the effects and problems of seasonal winds in the various regions of the earth. Air currents such as the Fohn blowing over Switzerland, the Sirocco in Italy, the Sharav in the Middle East, and the Mistral in southern France were identified as a major cause of both physical and mental health problems. ranging from headaches and depression to even heart attacks.

The nature of the electrical charge with respect to the ions in the air currents in question appeared to be a common factor. A very high concentration of positive ions was identified as the main cause. 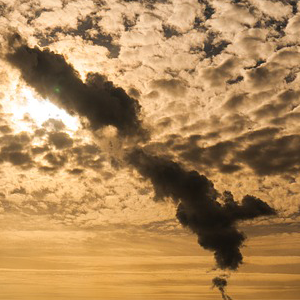 On the other hand, the investigated air near a waterfall, in the mountains, on the beach, in the forest or after spring rain turned out to contain large amounts of negative ions. By nature we therefore find a strong concentration of negative ions especially in a natural environment.

Further research showed that people react very well to negative ions levels above 1000 ions per cc. The scientific research further concluded that the negatively charged ions have a positive effect on all living organisms. Plants grow faster and healthier, people react with increased alertness but are also more relaxed.

In a normal undisturbed natural outdoor air, we meet about 1000 negative ions per cubic centimeter of air. The sunlight in the earth's atmosphere (the ionosphere), the earth's crust radiation and the friction of the wind ensure that negative ions are produced in a natural way. Furthermore, negative ions also have an air-cleaning effect; almost all particles in the air have a positive charge, while negative ions have a negative charge.

Because differently charged parts attract each other, the ions and the particles will attract each other, and will attach to each other. At high negative ion concentration, many ions will unite with dust particles and cluster together. This cluster is too heavy to float in the air. The result of this is that the chunks of particles sink to the bottom and can no longer be inhaled. And therefore can not cause irritation in a respiratory tract.

Suspended particulate matter particles are the carriers for various allergens toxic chemical and pathogens. The negative ions give their charge to the molecule. These new negatively charged molecules again bind to other positively charged molecules from the immediate environment. This agglomeration leads to the already mentioned sinking of the clusters by the weight increases. This process removes harmful substances from the breathing air.

In our current living climate, on the other hand, we find indoors, through concrete floors. strong insulation, electrical appliances, wifi and cell phones often only a low concentration of good (negative) ions and therefore mainly dead air. Workplaces, especially in factories and office buildings, generally have even more harmful air. This is largely due to the steel and concrete construction of commercial buildings. These materials absorb negative ions like a magnet. Recent studies of air quality in office buildings reported an average of 25-50 negative ions per cc.

There are special measuring devices that can measure the quality and quantity of ions. In many buildings where work is carried out and windows cannot be opened, the air is often unhealthy due to higher concentrations of positive ions. The result is that employees can become tired and lethargic and there is more absenteeism due to illness. At schools where the windows remain closed, the same problem arises. Children and teachers can become languid and lazy without being able to do anything about it.

This situation can occur because the air around them is 'spoiled'. Most people are not aware of the ions everywhere around us and what they can do for their health. A bedroom that remains closed at night will soon have a surplus of positive (bad) ions. Open as many windows as possible so that fresh air can enter, because that will bring about a lot of improvement. This is even the case when the air is less clean due to environmental pollution, such as in and around the cities. It is always a good idea to open windows to let negative ions into the house and thus create better living conditions, which will make breathing smoother and healthier.

A good ionizer can often purify the air even better. And provide clean air around you with negative ions. It is of the utmost importance to provide air quality around us with negative ions as much as possible. Fortunately, we have that under our own control. Make sure there is good ventilation. Regularly open the doors and windows so that the negative ions from outside have a chance to replace the positive ions.

Number of Negative Ions Per cm3:

Positive ions (cations) have a degrading effect on the environment and our health, they make the air unusable and deadly. Positive ions are free radicals that are harmful to our health and are the cause of oxidative stress (which causes significant damage to cell structures and DNA). The surplus of positive ions in the atmosphere contributes to many health problems and welfare diseases. An average indoor climate has a negative ion content of about 100 negative ions per cc. Unfortunately, most of the elements in our modern environments act as a vacuum cleaner for negative ions. They cause serious depletion of the negative ions. Think about this:

If you are under the influence of an environment loaded with predominantly positive ions for a long time, it has a bad influence on the immune system. The result is that the free radicals to which we are exposed are no longer optimally broken down. This has a bad influence on the healthy body cells and tissues and accelerates the aging process. Positive ions therefore spoil the air and are pathogenic for all living things. The first symptoms of the negative impact that the abundant influence of positive ions have on our health are complaints such as fatigue. lethargy and respiratory problems.

Negative ions (anions), on the other hand, are seen as the vitamins of the air because they vitalize the air. Negative ions make the air healthy and liveable and have a beneficial effect on everything that lives. Negative ions are becoming increasingly rare because the conditions under which negative ions are created by human activities are severely restricted. In our atmosphere an average of 1500 to 4000 ions can be measured per square centimeter (cm3).

The effect of negative ions on the body

The key is then to stimulate the production of negative electrical ions and reduce positively charged ions. Researchers are experimenting on electrical ions and cell membrane permeability. In the experiment was used to illustrate the skin cell membrane. When positively charged ions were penetrated into the surface of the skin, the pores and sweat glands began to shrink.

When negative electrical ions were permeated into the surface of the skin, the pores and sweat glands expanded, demonstrating good metabolism of the cell membranes. This phenomenon is called Prototype Plasma Membrane of Dermal Reflection. European scientists also research the influence of ions on the human body. They proposed the following hypothesis negatively charged ions are beneficial to the human body in different ways;

The amount of negative ions and their effect on humans:

A good living environment provided with enough negative ions is very important for the functioning of the electrons inside and outside the body cells, it has great influence on the health of the human body. Dead air makes us tired and lethargic. And if you are listless, there is no place for passion, work. Most people do not realize enough how important the air around us is for our health and how positive ions can negatively influence our lives. When positive or negative ions are formed in a certain process one speaks of ionization.