Ozone (Trioxygen, O3) is a bluish gas, it is an activated form of oxygen consisting of three oxygen atoms instead of two. These active molecules are unstable and seek stable (odor) molecules to bind to and therefore oxidize. Ozone is known as a gas produced by smog and warmer temperatures, therefore it often has a negative association with humans, however it is a natural air purifier without which life on earth would not be possible. Also in the mountains and at high altitudes the ozone level is higher, places that are known for their pure air.

What is oxidation and how does it eliminate odors?

Oxidation is a chemical process in which one substance emits electrons to another in which the oxidation number of the first substance increases and results in a change of state. Odors and pollutants transform into odorless carbon dioxide and ozone reduces to ordinary oxygen. Metalic rust is also the result of the process of oxidation. Fire itself is an oxidation process that requires heat.

How is ozone created?

How does ozone eliminate microorganisms and viruses?

Ozone is particularly effective against microorganisms including fungi, yeasts, algae, (flu) viruses and bacteria such as legionella, salmonella, Escherichia coli and MRSA. The unstable ozone molecules come into contact with the cell wall of the bacterium which causes an oxidizing reaction, the cell wall is perforated and the bacterium cannot survive. In the case of viruses, the protein mantle is attacked which makes it impossible for the virus to reproduce which effectively eliminates the virus.

What can ozone do against the Coronavirus?

SARS and chickenpox are known to spread through aerosols and can still infect people after the person carrying the virus has already left the space. There is currently no detailed data known about the COVID 19 virus, but it is assumed that this can be a problem especially in medical facilities.

An aerosol is a mixture of dust particles or liquid droplets in a gas. The size is in the order of 0.2 to 200 micrometers. Clouds and fog are examples of an aerosol; they both consist of very small droplets of water in air.

The extent to which the virus actually spreads through the air is therefore not entirely clear at the moment, but it is clear that the virus can survive on surfaces, this is also the reason why it is recommended to wash your hands very regularly.

Ozone is an excellent way to disinfect air and surfaces in a room, by running an ozone generator for a few hours a room can be disinfected. Because viruses are even more sensitive to ozone than bacteria, viruses will be eliminated faster than bacteria.

How long an ozone generator needs to run depends on the size of the room, for a room of 100 square meters we would advise to run an ozone generator for a few hours, this should be seen as an estimate, every situation is of course different.

How does ozone kill bacteria and viruses? 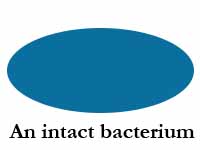 This image represents an intact cell (bacteria or virus). 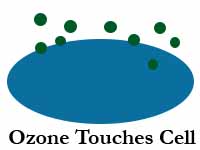 In this image the green dots represent ozone hitting the (bacteria or virus) cell wall. 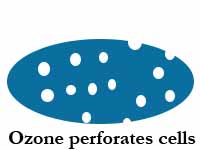 Ozone perforates and weakens the cell walls causing heavy damage to the microorganism. 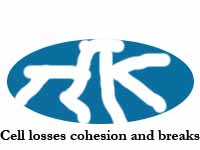 As the cells keep getting bombarded by ozone they lose structural integrity and ultimately break down completely into inoffensive chunks, no longer capable of causing harm.


How long will ozone remain active?

Ozone is an unstable gas, after activation by the ozone generator the reduction to oxygen starts immediately, the half-life in dry, clean air is on average 20 to 100 minutes. The duration of this process varies in practice and depends on circumstances such as temperature, humidity, air pressure and especially the amount of reactive substances/organisms in the air. In other words, the more pollutants in the air that are oxidized by ozone, the faster the ozone itself is reduced to oxygen. Ozone is heavier than air, so it is advisable to use a ventilator to circulate the air in the room.

Is ozone harmful to health?

Ozone in high doses can be harmful to health, for a normal working week of 5 days, 8 hours per day is a maximum acceptable concentration (MAC) of up to 0.06 PPM (PPM = Parts Per Million). At a MAC-value of 0,3 PPM only 15 minutes applies in a room.

An ozone generator can be seen as a tool, and can be used, for example, to decontaminate a room from microorganisms such as viruses, bacteria or fungi. It is important to air the room after using the ozone generator. But even if the room is not aired, ozone will return to its natural level over time (depending on the size of the room, the ozone level, ventilation and pollution). As an indication, this is a matter of minutes or hours. Ozone has a smell that is well detectable, when the smell is gone you can also assume that the ozone level has dropped to a healthy level.

Read more about the toxic effects