With the announced tropical temperatures in prospect, a possible exceeding of the so-called ozone threshold will also be discussed again. But what is ozone? And what makes it harmful? Ozone is a special molecule of oxygen consisting of three oxygen atoms (O3). Normally oxygen occurs in the atmosphere as O2, two oxygen atoms that together form a molecule. Ozone is a highly reactive gas with a strong oxidizing effect, and therefore harmful to humans, animals, plants and even some materials. 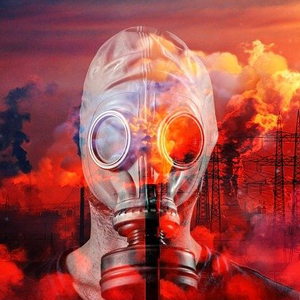 Ozone is a maverick among pollutants, in the sense that it is not emitted directly, but under certain conditions is formed from other pollutants, including nitrogen oxides and VOCs, volatile organic hydrocarbons found mainly in fuels and solvents, including paint.

The harmful ozone in question has nothing to do with the ozone layer, which is mainly known for the annual hole that appears above the South Pole and sometimes also at the North Pole. The ozone in the ozone layer is located in the stratosphere, the part of the atmosphere between 15 and 45 kilometers above the earth's surface. It is also not a real layer, in that punosphere there are widely spread ozone molecules that protect the earth against the effects of harmful ultraviolet rays from the sun.

The ozone in question is found in the lower layers of air, the troposphere, and it is formed on warm days by the action of ultraviolet rays from the sun on air polluted with nitrogen oxides and volatile organic compounds (VOCs).

The formation of ozone in the lowest layers of air therefore requires sunlight, and it must also be warm. Ozone pollution is therefore a phenomenon that only occurs in warm periods in our country, from May to August, exceptionally at the end of April or the beginning of September. In addition, the wind must come from the land and not be too strong, and there must be enough pollutants in the air, moreover, in the right proportions.

Ozone pollution is sometimes called summer smog, and you may have noticed that with summer smog there are no speed limits on freeways, but with winter smog sometimes there are. This is because although ozone is formed under the influence of heat and sunlight from nitrogen oxides and VOCs - of which traffic is the main "supplier", by more than 50 percent - ozone can also be broken down by nitrogen oxides.

As a result, there is often less ozone in the cities than in the countryside: in the cities there is more road traffic that emits a lot of nitrogen monoxide (NO), so ozone reacts to nitrogen dioxide (NO2) and oxygen. NO has a very short lifespan and oxidizes almost immediately to NO2, which has a much longer lifespan, even a few days.

As a result, NO2 can be transported by the wind over long distances from the city to the countryside. There, when it is warm and sunny, NO2 forms ozone, and since there is less traffic and therefore less NO emissions, less ozone is broken down in rural areas and concentrations are therefore often higher.

Restricting traffic therefore does not make much sense, and may even have a distant effect: at weekends, when there is less traffic, ozone concentrations are often higher because less ozone is broken down.

Winter smog, on the other hand, does not contain ozone, for which it is too cold and there is too little sun, but consists mainly of fine dust, nitrogen oxides and sulphur oxides. These substances are emitted directly, mainly by traffic and industry, and so limiting their emission by traffic has a direct effect there.

The effects of ozone strongly depend on the concentration and are also very different from person to person. As you would expect, people with lung problems, the elderly and children are extra sensitive. There is also a group of "responders", healthy people who are extra sensitive to ozone. This concerns about 10 percent of the population, and for the time being it is not clear why they have this extra sensitivity.

Anyone who undertakes strenuous physical exertion in the open air at high ozone concentrations also runs an additional risk as his breathing accelerates and he is therefore more exposed to ozone. This why you should look for a negative ion generator without ozone production when you're shopping for an ionizer.

There are standards for ozone:

However, this does not mean that below 180 micrograms of ozone per cubic meter of air there would be no effects at all. However, they would only occur in less than 5% of the population.

Incidentally, little is known about the effect of long-term exposure to low concentrations. However, a study has shown that there is a causal relationship between chronic exposure to ozone pollution and death from lung disease.

Exposure to ozone at concentrations between 180 and 240 micrograms leads to a reduction in lung function of less than 5 percent in ordinary people, and less than 10 percent in sensitive people, possibly also to inflammation of the respiratory tract. It can also lead to eye irritation and coughing.

At higher concentrations, between 240 and 360 micrograms, the average reduction in lung function is between 5 and 15 percent, in sensitive people between 10 and 30 percent. Irritation of the eyes, nose and throat occurs, as well as symptoms such as cough, chest pain, and shortness of breath in sensitive people. In people with CNRD - chronic non-specific respiratory diseases - the severity and frequency of their symptoms increases.

At concentrations higher than 360 micrograms, the average reduction in lung function in healthy people is more than 15 percent, in sensitive people more than 30 percent. Sensitive people exhibit severe respiratory symptoms such as persistent cough, chest pain, shortness of breath, difficulty breathing, headaches, nausea and dizziness. People with CNRD are now experiencing a sharp increase in the severity and frequency of their symptoms.

On the site of the Interregional Cell for the Environment (IRCEL) you will find more information about ozone and other forms of air pollution. This site was also used as a source for this article.